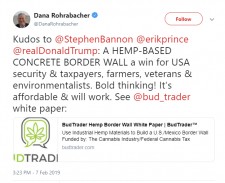 DISTRICT OF COLUMBIA:  ​​In a Tweet posted from his official Twitter account, Congressman Dana Rohrabacher urged President Trump to read and consider a plan created by the cannabis community for a southern border wall constructed from a hemp-based material, known as Hemp concrete. The plan also includes national cannabis legalization with a 3% federal tax that would fully fund the border wall, as well as a program to employ US Veterans in its construction.

Rohrabacher’s statement comes in the wake of news that Bannon and Prince, along with other key Republican operatives, are developing plans to build a Hempcrete wall along the U.S./Mexico border, but are still seeking private funding for the project, according to POLITICO.

“According to Congressman Rohrabacher, he spoke to Steve Bannon and he is going to read the Hemp Wall white paper that BudTrader and the Cannabis/Hemp Community wrote,” says BudTrader.com CEO Brad McLaughlin, who originally proposed the hemp wall concept to Congressman Rohrabacher in April of 2018. McLaughlin’s proposal calls for federal legalization of cannabis (including for veterans and government workers) and a 3% federal tax on cannabis sales to fund the wall.

BudTrader was in the news recently for offering Free Cannabis to federal employees during the government shutdown as first reported by The Hill. In the wake of The Hill story, BudTrader CEO Brad McLaughlin has been calling for Federal Employees to have safe access to cannabis, which is currently prohibited. “Federal Employees should have safe and legal access to medical cannabis. I can’t think of one reason why they shouldn’t”.

McLaughlin formally submitted his Hemp Wall White Paper to then Congressman Dana Rohrabacher in September 2018 after a three day trip to Washington D.C. with the Congressman, where he was advocating for the Farm Bill and Cannabis Legalization on the federal level. He met members of congress and President Trump.

The full Research Paper can be found here: Use Industrial Hemp Materials to Build a U.S./Mexico Border Wall Funded by: The Cannabis Industry/Federal Cannabis Tax

Making and cooking with THC coconut oil is not as difficult as it may sound. It is a nifty way to consume cannabis. You can bake cannabis coconut oil into different types of edibles or take it alone. … END_OF_DOCUMENT_TOKEN_TO_BE_REPLACED

COLORADO: A 2021 survey finds a positive correlation between the number of COVID-19 cases and demand for medical cannabis; more than half of patients said they used cannabis "to feel happy." -- 55% … END_OF_DOCUMENT_TOKEN_TO_BE_REPLACED

DISTRICT OF COLUMBIA:  Over 200 drug policy, harm reduction, health care, and community based organizations from across the country today sent a letter to Rahul Gupta, Team Lead for the Office of … END_OF_DOCUMENT_TOKEN_TO_BE_REPLACED

Welcome to the latest installment of Curt's Cannabis Corner -- a series of educational articles from technical writer Curt Robbins at Higher Learning LV and MJNews Network. This collection … END_OF_DOCUMENT_TOKEN_TO_BE_REPLACED