WASHINGTON: On Thursday, July 23, 2015 the Center for the Study of Cannabis and Society (CASP) will be hosting, Terpestival, a day of hands-on education for cannabis industry professionals, consumer and others interested in whole plant science.

According to organizers, Terpestival will be held at 1222 S Angelo Street, Seattle, and will focus on understanding terpenoid and cannabinoid constituents in the cannabis plant.  This event is dedicated to evidence- cannabinoid science will follow a keynote talk from Dr, Ethan Russo.  Terpestival is intended to provide growers and processors an opportunity to test and present measurable information about their flower and extracts, and move the conversation beyond THC.

As part of the festival, CASP will be hosting a Terpene Crown competition, as  an opportunity for growers and solvent-less concentrate producers to present their top genetics and extracts, and to compete against others in the medical and adult use cannabis industries.

“The Terpene Crown is part of the Terpestival and intended to highlight the quantitative science behind the quality of the Cannabis,” Wendy Maguire, media coordinator for the event told us. “We’re really excited about this part of the event.”

Cost of entry is $100.00, and scholarships are available.

WASHINGTON: It’s been a while since we’ve looked at the progression of I 502 Retail Cannabis landscape, pictured above in the map by Steve Hyde.  The conjunctural interest is driven by our need to understand how fast I 502 retail stores are currently being approved, now that the availability of supply is no longer a barrier to entry. We expected more retailers to open up once this happened, and in the trendline below we see that around January 1, 2015, the pace of new approvals began to exceed the overall trend since July 6. 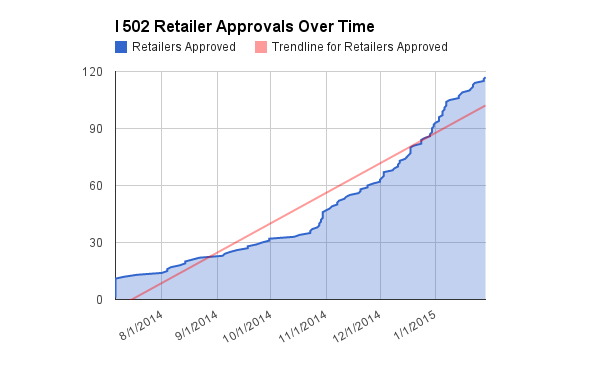 There are lots of other factors that influence retail decisions to go into business, of course. The availability of affordable retail space for lottery winners, and subsequent lottery replacements for the 25 retail applicants who for one reason or another failed to cash in on their lottery number, is the most significant variable. This of course is also influenced by jurisdictional bans and moratoria that represent a ceiling on how many of the 334 retail slots can possibly open, even given approval.

It’s also important to note that many “approved” applicants are not yet open, because it takes a little while to open retail doors once approved. As of February 3, 2015, 117 retail stores have been approved. Dozens of that number are not yet open, and we anticipate that their arrival in the market will help clear the harvest bounty. It is too early to say how much.

But one thing we can say with some confidence, is that the flip side to the Producer/Processor glut problem is that prices are down and quite possibly, I 502 recreational stores may be picking up consumers for whom I 502 product is a reasonable substitute for medical access point product, if price of flower is the main obstacle to switching over. Of course, there’s a lot more to it than that, but the closer retail prices for comparable product for comparable consumers (ie, not patients), the easier it will be for I 502 producers to clear inventory.

Warning: this post contains calculations from data provided by the WSLCB, without contextual explanation for the December 2014 anomalous sales data; and without a clear definition for retail gram volumes given how difficult that is to include concentrates and edibles. The WSLCB has recently tightened their information provision services and informs me that I should have answers from them in a month or two.

WASHINGTON:  The seasonal glut deriving from fall harvest has a lot of I 502 producer/processors worried about how and when to sell built-up inventory. This post uses WSLCB spreadsheets released to CASP on January 27 to estimate current total market inventory, on the one hand, and retail sales data for projecting inventory clearance on the other. Since national media has decided to throw unsubstantiated, alarming numbers around, I have decided that it is necessary to provide the best educated guess I can based on actual data received from the WSLCB.

The graphs above depict the following information gathered in table form below. Let’s take them one at a time.

The retail volume data is clearly problematic. The first five months show healthy, even logarithmic growth in the volume of cannabis sold per month. November’s sales more than double October’s, with 1553.77 lbs sold. December’s data, on the other hand, return us to a volume sold that is less than the second month of I 502 retail volume. What should we make of this? On the one hand, we could guess that the way retail volume is calculated changed in December, casting the first five month’s data in doubt. On the other, we could guess that December’s data is off for some other reason. A third option would be to doubt all of the numbers provided.

Making and cooking with THC coconut oil is not as difficult as it may sound. It is a nifty way to consume cannabis. You can bake cannabis coconut oil into different types of edibles or take it alone. … END_OF_DOCUMENT_TOKEN_TO_BE_REPLACED

Anyone who’s suffered throughout their life with uncooperative skin has probably looked at many solutions to their troubles. Once they’ve exhausted other more obvious solutions, they may then cast a … END_OF_DOCUMENT_TOKEN_TO_BE_REPLACED

DISTRICT OF COLUMBIA:  Over 200 drug policy, harm reduction, health care, and community based organizations from across the country today sent a letter to Rahul Gupta, Team Lead for the Office of … END_OF_DOCUMENT_TOKEN_TO_BE_REPLACED

Welcome to the second installment in the new series of educational articles from technical writer Curt Robbins at Higher Learning LV and MJNews Network. This collection is intended for cannabis and … END_OF_DOCUMENT_TOKEN_TO_BE_REPLACED