NEW YORK: Medical Marijuana, Inc. (MJNA.PK) reported Q2 results and released its OTC disclosure right as the market opened. The stock had gapped up following a huge two-day run (and a promotion by “Money Runners” late in the day on 8/12) but has now reversed, falling below the former key resistance level of $0.20 and declining more than 25% from the prior close. I had recently mentioned some very favorable near-term news, but had warned those considering investment to wait for Q2 results. The report had mostly bad news, but nothing detrimental. I continue to suggest that a better entry should be available in the future. 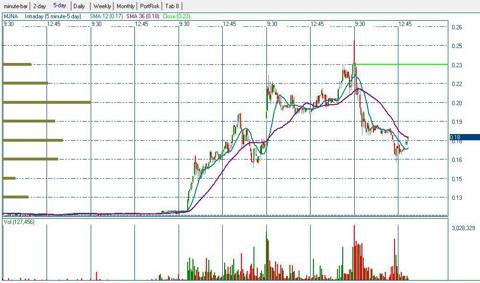 This is the very high volume price action over the past five days. The longer-term chart offers a better perspective: 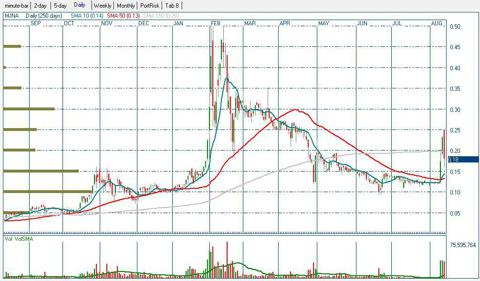 The stock had been basing since the late-April plunge and appeared to be breaking out on very big volume. At this time, it has fallen back into that range of $0.10-0.20. Let’s review the new information.

One positive that I want to highlight is improved transparency. It’s clear to me that the company is trying to move in the right direction. Kudos to them for not only getting their filing out on time, but for a lot more information that was presented more clearly. There is still work to do in my opinion, but they are moving in the right direction.

One of the issues that has been of importance is the share-count. I had discussed this in my most recent MJNA update. The company reported an A/S of 950mm shares still, so, at least for now, there is no obvious path to continued massive dilution. In fact, the company suggested it will not be increased.

The press release paints a much rosier picture than the reality:

Stripping out the CannaVest (CANV.OB) installment payments ($8mm), sales were just $834K, down from Q1’s $2.185mm. The company also reported an operating loss of $342K, compared to an operating profit of $571K in the previous quarter (and $1.47mm a year ago). This is disappointing because the company needs positive cash flow. It is maxed out on its share count (946mm now), it still has no credit line, cash is minimal and there is no clear way to monetize its investment in CANV.

Interestingly, CANV paid part of the installment in cash. Recall that the stock is collared between $4.50 and $6.00. CANV has “traded” substantially higher, so paying cash makes more sense than giving stock. CANV, though, hasn’t generated cash. Its CEO, through Roen Ventures, has loaned the company an additional $3mm as I described in an “instablog.” The disclosure document had conflicting information, at one point saying that $750K cash had been paid but $727K in another instance.

Digging in a bit, Note 5 in the disclosure reveals that Red Dice Holdings (60% owned by MJNA and 40% by Dixie Elixirs) had gross income of just $156K (and costs of $74K). This is very disappointing, as the Dixie Botanical products have been on the market for a while. Further, RDH “owes the company $1.734mm,” up from $1.05mm last quarter. Further, the CanChew CBD gum launch failed miserably, a tiny fraction of what I would have expected, with sales of just $9,801. Almost all of the Q1 operating loss can be attributed to this division ($307K). While I think that this could be a revolutionary product, it is off to a poor start.

Finally, MJNA did not make any additions to the Board of Directors or to its executive team. Further, it didn’t update its previous (unrealistic) guidance from February.

Anytime I see “SEC,” I get concerned. While it’s premature to jump to conclusions, it’s worth noting this disclosure:

My guess is that this has something to do with some of the mistakes in previous filings by former management.

Canna Moms Are Good Moms Too

By Amanda Rogers Hi. I'm Amanda, founder of Canna Mom's Are Good Mom's Too. A group that brings Moms, those who identify as and supporters together worldwide to educate them and spread more … END_OF_DOCUMENT_TOKEN_TO_BE_REPLACED

Anyone who’s suffered throughout their life with uncooperative skin has probably looked at many solutions to their troubles. Once they’ve exhausted other more obvious solutions, they may then cast a … END_OF_DOCUMENT_TOKEN_TO_BE_REPLACED

DISTRICT OF COLUMBIA:  Over 200 drug policy, harm reduction, health care, and community based organizations from across the country today sent a letter to Rahul Gupta, Team Lead for the Office of … END_OF_DOCUMENT_TOKEN_TO_BE_REPLACED

Welcome to the next installment of Curt's Cannabis Corner, a new series of educational articles from technical writer Curt Robbins at Higher Learning LV and MJNews Network. This collection is intended … END_OF_DOCUMENT_TOKEN_TO_BE_REPLACED