Jake Dimmock is an old-fashioned Southern Gentleman, and he looks the part. His wide grin and happy round glasses fill a face framed by long, rock-star blonde-grey hair. Sporting a dark blazer over clean blue jeans, a black shirt and bolo tie when we meet up, Jake is a big guy who exudes a gentle calmness and cheerful politeness that lets you know right away that you’re going to like him. And you do.

“I’m the Jerry Garcia of the cannabis community,” he jokes, and the physical resemblance is unmistakable, “I’m the guy you want to have a beer with.” The 55 year-old former merchant seaman from Norfolk, Virginia, carries a quiet confidence, in contrast to the strong egos that define so many of his peers.

The son of conservative Republican parents – his dad a retired Army Colonel – the young Dimmock spent his teenage years in Virginia cultivating a passion for pot. His initial interest was strictly recreational, not medicinal, “We only knew that when you smoked it, it made you feel better.”

Back then, marijuana was a generational right of passage, part and parcel of a youth culture that embodied long hair, anti-war protest, drug experimentation and rock & roll. “I tell my patients I survived paraquat pot,” he jokes, referring to the 1970′s federal eradication program that saw the spraying of Mexican marijuana fields with toxic chemicals. Legend has it that green cannabis leaves sprayed with the potent herbicide turned yellow – resulting in unethical pot dealers selling the tainted crops as “Acapulco Gold.” These were the early days of the War on Drugs, and there was plenty of reason to keep your head down, and grow your own.

Jake’s roots in horticulture predate his days as a junior stoner, stretching further back in his boyhood to summers working at Harold’s Nursery. It was there, working with Azaleas, that he learned about asexual reproduction, and picked up a host of greenhouse skills that would serve him well in his future life as a cultivator of cannabis.

When his mother became ill, Jake went to be with her, and when her illness turned terminal he stayed. He continued in his caregiver role after his father was diagnosed with brain cancer, eventually deciding to leave his job on a tugboat so he could devote his attention full-time to his dad’s care.

And if that weren’t enough, Jake was also called upon to serve as end-of-life caregiver for his first wife, when she too became terminally ill with cancer. And it was during this time that his grower and caregiver paths unite, as he was asked to grow medicinal cannabis as part of his ex-wife’s treatment. It did not take long before it became known throughout the medical marijuana community that Jake was a man of deep compassion and generosity, someone who could be counted on to provide cannabis to the sick and indigent.

That is how Dimmock came to the attention of John Davis and his partners, who were setting up what would later become Northwest Patient Resource Center. When they discovered that not only did Jake have the requisite skills and experience, but also some equipment, he was hired as employee #1 at NWPRC, acting as master gardener. Two and a half years later, Jake has come into season. Now co-owner of NWPRC, with Daniela Bernhard, the dispensary is widely regarded as one of the leading safe access points in Washington, and Dimmock, a founding member of the Coalition for Cannabis Standards and Ethics (CCSE), has assumed his natural role as one of the elders of the Northwest medical marijuana tribe. 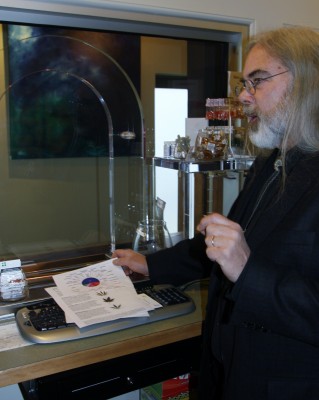 We meet Jake at the downtown Seattle location one recent Tuesday morning. The dispensary is impressive, featuring state-of-the-art technology – double-paned bulletproof glass teller windows, security cameras and buzzer-controlled doors – to ensure the safety of patients and employees, along with attractive modern furniture and original art to set the right tone. All the medicine is attractively packaged, labeled, and displayed. Sales are rung up, and processed through a POS system – although all sales are still made in cash, because of federal banking restrictions. There are a few branded products being showcased– Cannabis Basics Topicals and Solstice CBD tinctures (another brand in the Diego Pellicer stable), along with neatly labeled glass jars of candies, lozenges and chews and pre-rolls. There are chairs and neat stacks of DOPE, Cannabis Now and Northwest Leaf magazines. It’s much fancier than your average CVS or Walgreens, and more like a doctor’s waiting room.

Behind the glass, Jake is the consummate “budtender.” He knows his regular customers by name, and their needs by heart. He knows his medicine, and acts as a patient resource, dispensing free educational pamphlets, along with the proper remedies, to help patients understand the many ways that cannabis can be used to treat their ailments and improve their overall health.

After the passage of a voter initiative (I-502) in November, 2012, legalized the recreational use of marijuana by adults 21+, the fate of medical marijuana in Washington State remains uncertain. Everyone in the community expects that change will radically change the existing system, but no one knows just how, and fear and emotion are running high.

During Cannabis Lobby Days at the State Legislature in Olympia this past week, when activists had the opportunity to testify before their lawmakers, factional infighting flared up once again. Jake believes that CCSE and other community leaders must work harder to present a more professional and organized front to the Legislature and the public at large, if they are to be successful in protecting patient rights.

What the future portends for medical marijuana dispensaries like NWPRC, and whether they will exist as part of I-502 or separately, is in the hands of the Legislators. For now, the big game in Washington is the imminent rollout of the legal recreational marijuana marketplace, as investors, growers, processors and retailers jockey for position and await the all-important issuance of licenses by the Washington State Liquor Control Board (WSLCB).

NWPRC has teamed up with powerhouse Diego Pellicer, the well-financed group backed by Microsoft millionaire Jamen Shively. The arrangement provides NWPRC with a brain trust, access to financing and a network of strategic relationships – and allows for the fancy new facility and, more importantly, flexibility to respond to the eventual marketplace opportunity.

Until the WSLCB issues I-502 licenses for growers, processors and retailers, no one knows just who the industry players will be. The first growers’ licenses are expected to be issued in late January or early February, with processor and retailer licenses to follow. So until then, there are a lot of discussions, letters of intent being written, and business plans contingencies being contemplated throughout the emerging cannabis industry. “Right now we have a gentleman’s handshake,” Jake says of NWPRC’s deal with Diego Pellicer.

So while Big Marijuana machinations are being crafted around him, Jake, the compassionate master grower, remains focused on advocacy and patient rights. “No matter what happens, I’ll still be working with patients and part of the cannabis community.” Jakes assures me. “Even if I had to give up my own right to personally use marijuana, I would give it up so that suffering patients could have it.”

David Rheins is founder and executive director of the MJBA, a leading B2B trade organization, providing business intelligence, professional networking and opportunity for participants in the legal cannabis industry.

Making and cooking with THC coconut oil is not as difficult as it may sound. It is a nifty way to consume cannabis. You can bake cannabis coconut oil into different types of edibles or take it alone. … END_OF_DOCUMENT_TOKEN_TO_BE_REPLACED

COLORADO: A 2021 survey finds a positive correlation between the number of COVID-19 cases and demand for medical cannabis; more than half of patients said they used cannabis "to feel happy." -- 55% … END_OF_DOCUMENT_TOKEN_TO_BE_REPLACED

DISTRICT OF COLUMBIA:  Over 200 drug policy, harm reduction, health care, and community based organizations from across the country today sent a letter to Rahul Gupta, Team Lead for the Office of … END_OF_DOCUMENT_TOKEN_TO_BE_REPLACED

Welcome to the next installment of Curt's Cannabis Corner, a new series of educational articles from technical writer Curt Robbins at Higher Learning LV and MJNews Network. This collection is intended … END_OF_DOCUMENT_TOKEN_TO_BE_REPLACED